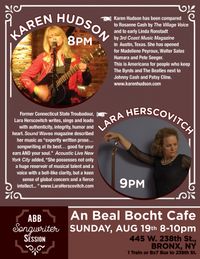 This is the first installment of Karen Hudson's monthly ABB Songwriter Session residency with her guest Sisters In Song. An Beal Bocht welcomes Lara Herscovitch— a modern American songwriter-poet-performer gem, creating masterful contemporary folk with blues, pop and jazz influences. The former Connecticut State Troubadour writes, sings and leads with authenticity, integrity, humor and heart, delivering performances that inspire, inform, uplift and entertain. Sound Waves Magazine described her music as “expertly written prose… songwriting at its best… good for your ears AND your soul.” Delivered with a voice Performer Magazine called “clear and smooth like expensive liquor,” Acoustic Live in New York City added, “She possesses not only a huge reservoir of musical talent and a voice with a bell-like clarity, but a keen sense of global concern and a fierce intellect... It might seem too good to be true, but true it is.” www.LaraHerscovitch.com

Karen Hudson, performing songwriter/host: A distinctive presence in the NYC Americana scene, Karen Hudson wins audiences over with her edgy wit, elegant stage presence and wry, insightful tunesmithing. Hudson has been compared to Rosanne Cash by The Village Voice, and to early Linda Ronstadt by 3rd Coast Music Magazine in Austin, Texas. On her third CD “Sonic Bloom,” produced by Eric “Roscoe” Ambel, Hudson explores some gothic territory, but refuses to be held hostage by her loss, so even her darkest songs are tempered with wry humor. The musical roots go deep and broad — it’s ‘Americana’ for people who like to mix The Rolling Stones with their Patsy Cline. She has opened for Madeliene Peyroux, Walter Salas Humara and Pete Seeger.