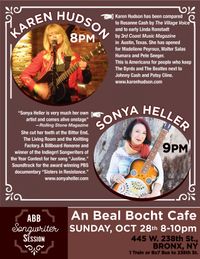 This is the last installment of Karen Hudson's monthly residency at An Beal Bocht Cafe with her guest Sisters In Song. ABB Songwriter Session welcomes Sonya Heller at 9PM. Sonya is a good friend of mine and you will certainly feel like one of hers after this show, she has such a wonderful spirit. She has toured extensively in Europe and the West Coast and calls NYC her home. Sonya Heller. Native New Yorker. A child of Russian immigrants cooks up her jazz inflected vocals and folk roots with equal parts American sass and her grandmothers Slavic drama.

She cut her teeth at NYC’s iconic Bitter End, The Living Room and the Knitting Factory in the footsteps of Joni Mitchell, Laura Nyro and Leonard Cohen, whose poetic genius sparked her very early on. A Billboard Honoree and winner of the Indiegrrl Songwriters of the Year Contest for her song "Justine." Soundtrack for the award winning documentary "Sisters in Resistance" (PBS, Avignon and Human Rights Watch film festivals)

“Sonya Heller is very much her own artist and comes alive onstage” —Rolling Stone
https://www.sonyaheller.com/music

Karen Hudson, performing songwriter/host: A distinctive presence in the NYC Americana scene, Karen Hudson wins audiences over with her edgy wit, elegant stage presence and wry, insightful tunesmithing. Hudson has been compared to Rosanne Cash by The Village Voice, and to early Linda Ronstadt by 3rd Coast Music Magazine in Austin, Texas. On her third CD “Sonic Bloom,” produced by Eric “Roscoe” Ambel, Hudson explores some gothic territory, but refuses to be held hostage by her loss, so even her darkest songs are tempered with wry humor. The musical roots go deep and broad — it’s ‘Americana’ for people who like to mix The Rolling Stones with their Patsy Cline. She has opened for Madeliene Peyroux, Walter Salas Humara and Pete Seeger.